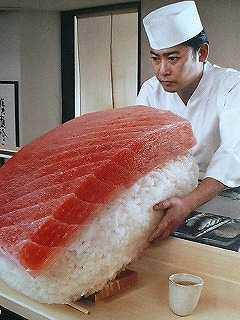 A friend of mine recently visited an American sushi restaurant he’d loved in the past. The restaurant had just gone upscale, with a more authentic Japanese approach, and he was eager to try the new menu. But when he ate the sushi he was disappointed. “The pieces were so small,” he complained to me.

In the U.S. we tend to think bigger is better. Many run-of-the-mill sushi places cater to this impulse by draping enormous pieces of fish across oversized balls of rice. Sometimes it takes two or three bites to through one of these things. But we assume we’re getting a better deal—more bang for the buck.

But while researching my book The Story of Sushi, I spoke with a number of traditionally-trained Japanese master sushi chefs, and read materials in Japanese on the cuisine. I found that not only are pieces of sushi supposed to be small, one-bite affairs, the best sushi is custom-tailored to the customer, like a good suit. Top sushi chefs told me that they actually discretely assess the size of each customer’s mouth at the sushi bar and adjust the size of the nigiri accordingly. Now that’s service.

That being said, as a rule a skilled chef is always going to make the sushi small, not large. That’s because authentic sushi should be packed together loosely and should fall apart in your mouth in a single bite—I’ve written about that issue in more detail here. So, if the chef makes the sushi too big, he’ll have to pack it more tightly than is ideal, just so it will hold together.

However, there are some exceptions to the smaller-is-better rule. For example, Japanese tradition holds that take-out sushi should be slightly larger than sushi eaten at the bar. And lunchtime sushi should be a bit bigger still. For you food geeks out there like me, here’s a detailed passage on the size question from a Japanese book on sushi by a scholar named Nakamura Mitsuru:

When nigiri sushi is made for delivery, each topping should be about 12 grams, and the sushi rice should be about 25 grams; a single nigiri weighs up to 40 grams. For customers eating in the shop, however, the size is much smaller; only 10 grams of sushi rice are used. Each nigiri ends up being half the weight of the ones made for delivery, at about 20 grams a piece. But at lunchtime, the nigiri must be made bigger; between 40 and 50 grams per piece. Depending on the circumstances and the customer, the sushi chef must possess the technical skill to squeeze out four different sizes of nigiri.

He must also be able to differentiate his nigiri-making depending on the topping. He is not a master unless he is able to make his nigiri all balanced to the same height, even when the toppings are different thicknesses. Novice chefs use long-sliced onions [sarashi], or they get bean-curd leavings [okara] from a tofu shop, and use them to practice squeezing nigiri. Once a chef’s nigiri-making movements because steady and smooth, he becomes able to judge things like how many customer’s worth of sushi he can make from one shoh [1.8 liter] of rice.

And there’s another exception. In the old days, sushi chefs used to make their sushi bigger in general than most of them do today. Here’s an interesting query I recently received from an experienced American sushi eater:

My sushi chef mentioned that the most traditional sushiya in Japan (he specifically mentioned Jiro’s restaurant, and the place where he trained, a restaurant called Sukeroku) have huge pieces of sushi. He said that these pieces of nigiri usually take 2-3 whole bites to eat and that it is not expected that a patron can eat the sushi in one bite. He mentioned that this was separate from “ginza”-style high end sushi, which features daintier pieces that can be eaten in one bite. Is there any truth to this? I was always under the impression that it was a major faux pas to not eat a piece of nigiri in one fell swoop. I was also under the impression that monster-sized pieces were a distinctly American creation. He was telling me that traditional sushi is actually quite large.

The monster-sized sushi we have in the U.S. today is indeed a distinctly American creation, but it’s also true that in the past, when sushi was closer to its historical origins as a cheap street snack, chefs tended to make it bigger. The “Jiro” referred to above is one of the most famous sushi chefs in all of Japan, Ono Jiro. In a book about Ono Jiro, he’s quoted as saying this:

I think the best size for a piece of sushi is one-bite size, which is the standard now. However, from Meiji to beginning of Showa [i.e., approximately 1870 to 1930], the standard sushi size was one-and-a-half-bite size. In the post World War II period … the sushi business union decided to make 10 pieces of sushi out of [0.9 cup] of rice. Then each sushi became smaller than one-and-a-half-bite size.

My advice? Sit at the sushi bar and ask the chef to pack your sushi small and loose. You’ll be surprised at how different, and wonderful, the food becomes.