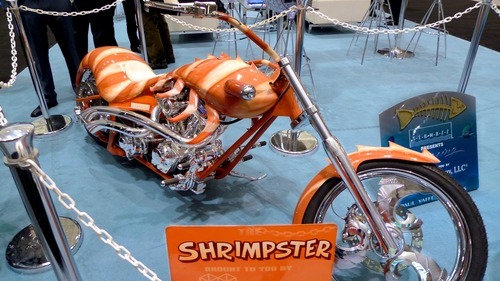 The International Seafood Show is surreal. A bizarro combo of sea critters and commerce, it takes place at the cavernous Boston Convention Center, which I visited last week while in town to be interviewed for a documentary film at the nearby New England Aquarium.

On display was this machine called the “Shrimpster.” I’m having a hard time believing that a member of Hell’s Angels, say, would ever be caught dead on something called the “Shrimpster.” If being The Lobster Man had made me rich, I would own one of these and would ride it around the country like Alton Brown to the various speaking engagements where I entertain audiences with my tales of lobster romance, but I would need a different name for it. Perhaps the “Lobster Chopper”? Suggestions?

There was also a fish motorcycle, as well as 35-year-old live lobsters, life-sized stuffed polar bears, seafood jewelry, and the lobster equivalent of Han Solo encased in carbonite, all of which you can check out in my photo album from the show.

Posted in Uncategorized and tagged lobster
← The Rites of SpringSize Matters →