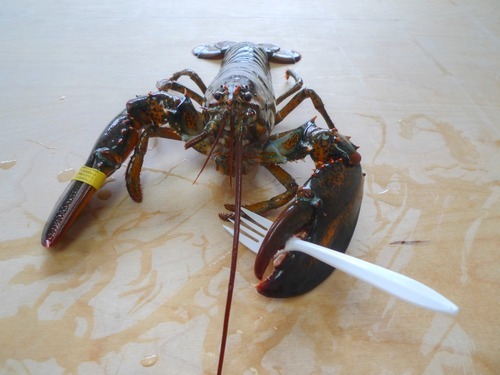 I snapped this photo over the weekend. I was visiting my friends at the Red Hook Lobster Pound in Brooklyn to be interviewed for a radio documentary about The Secret Life of Lobsters. I thought I’d show the reporter the power of the lobster’s crusher claw, so I encouraged this lobster to squeeze a plastic fork and break it to pieces. Instead, the lobster grabbed the fork and held it just as you or I would have and then sat there, as if expecting to be served a meal. (The only food immediately available that we could have served it would have been a lobster roll.) I take this as further evidence of what the ocean conservationist Carl Safina wrote after reading The Secret Life of Lobsters:

Lobsters do so many remarkable things that you might just conclude that the differences between people and lobsters are only skin-deep.