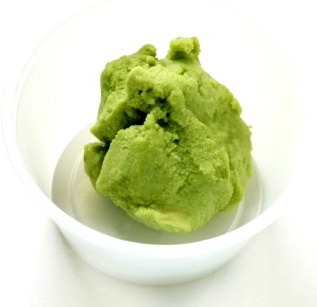 It comes as a shock to most of us. Not only is that spicy green paste we call “wasabi” not actually wasabi, it’s not even meant to be served alongside your sushi at all.

First things first. What is it? It’s fake. Instead of being real wasabi, it’s just plain old horseradish, plus some mix of mustard extract, citric acid, yellow dye no. 5, and blue dye no. 1. It comes in big industrial bags as a powder, and the chefs mix it with water before dinner to make that caustic paste. 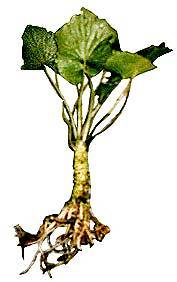 As I write in The Story of Sushi, real wasabi, pictured above, is a delicate, finicky plant that’s extremely difficult to grow and even more difficult to handle. And it has a more delicate, complex, and sweeter flavor than the fake stuff you’re used to. People who attend my historical sushi dinners are always surprised at how different the real thing tastes.

Real wasabi is a distant relative of horseradish that is native only to Japan and Sakhalin Island, a Russian outpost off Japan’s northern coast, and thrives best in shaded mountain streams. It’s rarely used at most sushi restaurants because it’s so expensive, so rare, and so volatile.

In Japan, even the best sushi chefs, who use real wasabi, generally don’t provide extra wasabi on the plate along with the sushi they serve. That’s because the chef puts exactly the right amount of wasabi inside each piece of sushi when he makes it. Good chefs actually alter the amount of wasabi they add inside each piece of sushi depending on the type of fish being used—less for more delicate fish, more for fattier fish with stronger flavors.

Posted in Sushi and tagged etiquette, wasabi
← Why There Are So Few Women Sushi ChefsThe Michael Jackson – Sushi Connection →