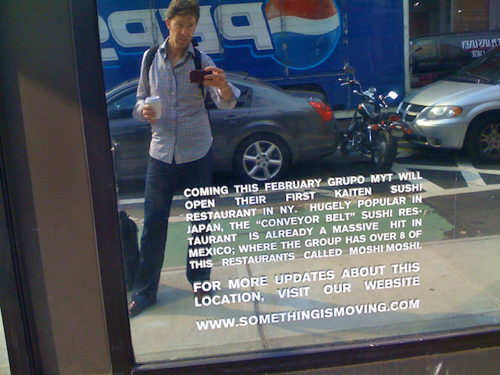 It’s official, I spotted the future digs of New York City’s fast-approaching kaiten sushi joint in SoHo, on the corner of Grand & West Broadway, which according to a sign on the window of interrogation-room glass will be opening in February. As you probably know, kaiten sushi is the Japanese term for “conveyor-belt” sushi, and apparently sushi lovers in NYC are meant to be enthused by the news that it’s “already a massive hit in Mexico.”

I know I sound like the sushi snob that I am, but any traditional sushi chef worth his real wasabi will tell you that a piece of sushi quickly dries out and oxidizes immediately after it’s made, which is why good sushi is best eaten straight out of the chef’s hands.

Yeah, I know conveyor-belt sushi is popular in Japan. The Japanese people eating in those places are the same people who buy their grilled salmon from 7-Eleven.

Let me make a suggestion: I think an excellent type of restaurant for employing slow-moving conveyor belts to deliver food to diners would be restaurants that specialize in serving Triscuits and Cheez Whiz.

In the meantime, these folks should know better than to claim to be the first kaiten sushi restaurant in New York. There’s already one a few blocks away in the food court of a grocery store. Which tells you something.