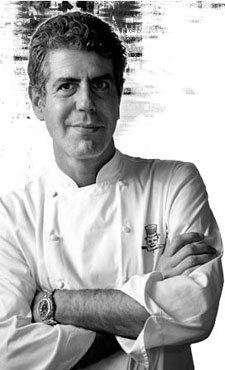 Cool: the other day Anthony Bourdain retweeted some of my sushi etiquette tips. Inevitable: amidst many positive responses, I got some others suggesting that perhaps such attention to detail was a tad elitist. Irony: I totally sympathize.

Food snobbery is exactly what I was hoping to avoid when I decided to focus my book The Story of Sushi on a motley crew of American sushi apprentices in L.A., rather than penning a hagiography of, say, Masa. (Though in the book I do, of course, delve deeply into the Japanese sushi tradition.)

On the other hand, researching the book made it clear to me how much is wrong with our day-to-day sushi, especially in America. And when I say wrong, the first thing I’m worried about is our health. And then there’s the health of the ecosystems that provide our fish.

My sushi-eating tips, and the educational dinners I host, are partly intended to help people get a more delicious and authentic meal, yes. But they’re also intended to help us avoid crap sushi that could make us unhealthy—there’s a lot of crap sushi out there these days—as well as take more care in the consumption of the oceans’ fast-disappearing sea creatures. Most of us don’t realize, for example, that all that wasabi and soy sauce and all those spicy rolls are there for a specific purpose—to prevent us from tasting fish that’s subpar or past its prime.

Here I have to give a shout out to Lucky Peach, the new food magazine from David Chang and McSweeney’s. The current issue, titled “American Food,” contains a graphic spread by cartoonist Lauren Weinstein that features some of the juiciest scary facts I covered in The Story of Sushi  about the origins of your typical sushi fish and turns them into an info-graphic called “Sushi, USA” that is not to be missed. This is why I insist on working with a traditionally trained, old-school sushi chef who’s been at it for thirty years.

Below is a snippet of the cartoon spread—look for the magazine at your newsstand or bookstore. 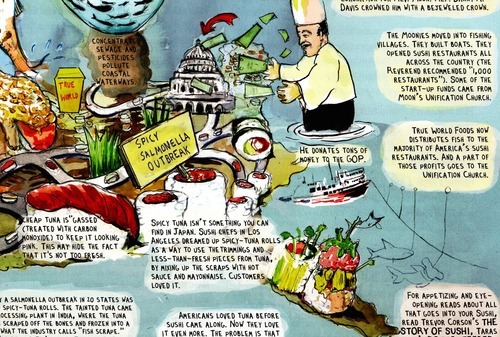 Posted in Sushi
← Japan Is So QuirkyThe Global Catch →