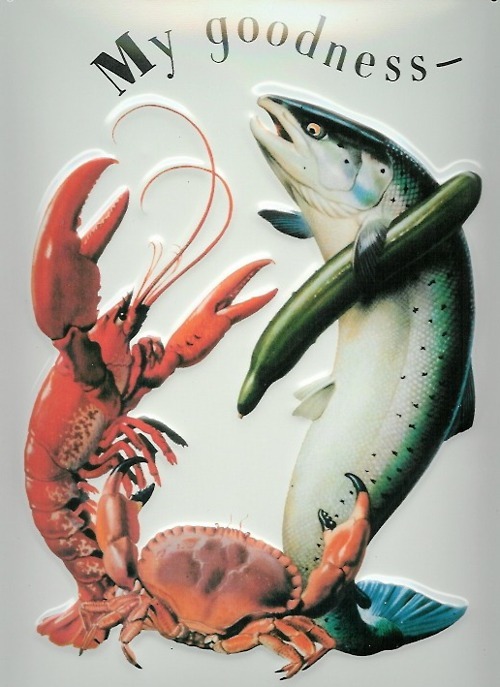 One of the scenes from The Secret Life of Lobsters that people remark about most is the description of the “LTV"—"lobster trap video"—which exposed the behavior of lobsters in a trap as rather like a mob of escaped convicts in a barroom brawl. Escaped convicts because, after their slugfest, most of the lobsters caught on the LTV security cameras didn’t stay imprisoned in the trap at all, but manage to bolt their underwater cage and remain at large.

The LTV was the brainchild of Dr. Win Watson at the University of New Hampshire, whose lab is exactly the place you’d want to work if you happen to be a marine-ecology-minded mad scientist. Other Dr. Watson projects I mention in the book include an Astroturf lobster treadmill, a baby lobster racetrack (with betting restricted to Dr. Watson’s students), and a tethered-lobster cross-generational cannibalism study.

One of Dr. Watson’s latest inquiries has asked whether lobsters talk. If you’ve read The Secret Life of Lobsters you know, of course, that they do—using urine ejected from nozzles on their faces. Which is also how they flirt on a date. But all that is another story. Here Dr. Watson was interested in vocalization—actual sound. Avid divers have told me that when they go lobster hunting underwater, they swear they hear the lobsters growling at them. But never before had audible lobster talk been scientifically documented.

Now it has, and the evidence suggests that lobsters aren’t just talking, they’re specifically talking to fish. (And the occasional invasive human.) Here is a short writeup of Dr. Watson’s recent discoveries from the current issue of the Working Waterfront:

Maybe no surprise to lobstermen who handle thousands of lobsters every week, researchers documented for the first time this year that lobsters make sound—part groan, part buzz—by vibrating the carapace, the largest part of the shell. A research team working in Dr. Win Watson’s laboratory at the University of New Hampshire conducted a series of experiments to study lobster noise-making habits.

They held lobsters in separate tanks—either alone, with other lobsters, or with fish, including cod and striped bass. The lobsters held alone made only one or two sounds in each 30-minute period, while those in the tanks with striped bass made 15 sounds, and those with cod made a raucous 50 sounds in the half hour.

The research team conducted a series of experiments with the sounds, and documented that 75 percent occurred when fish approached within a foot or two of the lobster, and often resulted in the fish moving away, leading to the conclusion that lobsters may be sounding off in order to discourage fish predation.

Posted in Uncategorized
← Too Much of a Good Thing?“Jiro Dreams of Sushi” Film Screening & Discussion with Eric Ripert and David Gelb →