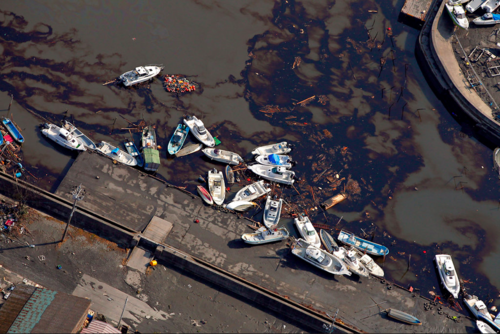 People have been asking me whether I think sushi is going to be safe to eat, with the threat of radiation from the stricken nuclear plant possibly affecting Japan’s food supply. While this might seem almost irrelevant considering the potential direct threat to the people of Japan at the moment, it’s a fair question. For starters, here are few thoughts I offered the New York Times in an article published today:

…Trevor Corson, a sushi expert and a former commercial fisherman who used to live in Japan, said seafood caught “in an ocean churning with movement and dispersal might turn out to be less of a concern than agricultural products that are exposed and stationary.”

But Mr. Corson also said the Japanese seafood industry could face a long and difficult struggle “to establish faith in the safety of their seafood—not unlike the challenges faced by gulf fishermen in the U.S. after the BP oil spill.”

The Tsukiji fish market in central Tokyo, the world’s largest clearinghouse for just about anything that fishermen pull from the sea, was not physically damaged by the earthquake. Its cobblestone aisles and alleyways were as loud, profane and hurly-burly as ever on Saturday. But something in Tsukiji’s soul seems to have been lost, or at least badly bruised, in the tsunami.

Before the disaster, the market drew 10 percent of its daily inventory of 2,400 tons of seafood from the waters off Tohoku, the coastal epicenter of the earthquake. The fishery there is renowned for its scallops, seaweed, bonito and shark’s fin. Tohoku, as a place and a brand in Japan, was formidable. …

“I have started to hear people in the West worrying about radioactive sushi and so on, but perception and reality are quite different,” said Mr. Corson, the author of The Story of Sushi. “Much of the seafood typically used in sushi doesn’t originate in Japan and never passes through the country.“

Check out the entire article, which discusses other Japanese food products as well, such as Kobe beef. I’ll try to post more on this question soon.

Update: My more detailed post on this topic at The Atlantic.