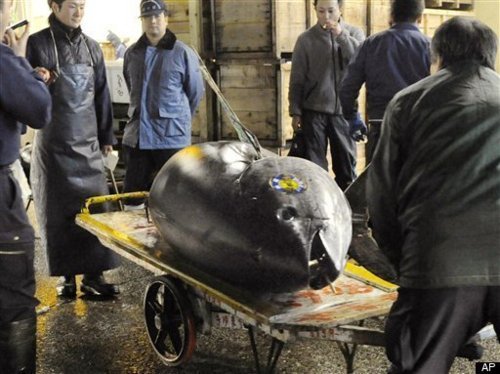 What’s with the $400,000 bluefin tuna that just sold at a new year’s auction in Tokyo? Nothing. This recurring headline of extravagantly priced tuna is one of those news items that leaves you with less knowledge than you had before you heard about it. That’s because the only reason any bidder at the Tokyo auction ever pays that much for a fish is to deliberately spend way more than any sane person should. Blowing that much on a tuna is either a celebration of recent profits, or a bid for publicity to boost a restaurant or distributor’s profile. In short, it’s money spent on advertising, not on fish. And clearly, while very expensive, it’s a technique that works.

Which is not to dismiss the larger, very real, and very sad trend of generally increasing prices for bluefin tuna due to their growing scarcity. At this rate, it’s only a matter of time before the global sushi industry wipes these majestic fish off the face of the earth.

Which is doubly sad, because it’s completely unnecessary. As I’ve written in The New York Times, The Atlantic, on Yahoo/CSM, and elsewhere, bluefin tuna aren’t even a traditional Japanese sushi fish.

Posted in Uncategorized and tagged sushi, sustainability, tuna
← Maine in WinterFinding Our Way →