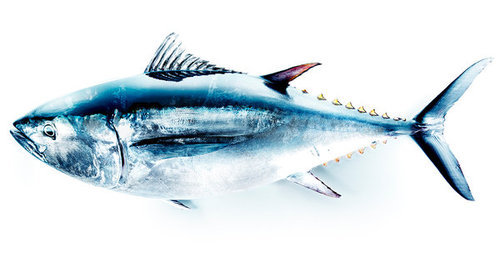 Discover the delights of an old-fashioned, traditional Japanese sushi menu that prizes the more authentic sushi fish–and skips the endangered tunas pushed by the globalized, industrial fishing and restaurant industries–by attending one of my historical sushi dinners. Bluefin tuna and the risks faced by this majestic fish from overfishing were the subject of a recent cover story in the New York Times Magazine.

The Times article quoted a co-owner of the global sushi chain Nobu named Ritchie Notar, who rationalized the chain’s ongoing exploitation of bluefin by saying, “We are dealing with thousands of years of cultural customs." Actually, the Japanese along with the rest of us have only started going ga-ga for bluefin toro in the past few decades, and as the Times article points out, tuna sushi didn’t even exist until about 170 years ago. Moreover, as I discuss at my dinner lectures, even then tuna was a trash fish for the Japanese, considered unfit for high-class sushi until well into the twentieth century. (I’ve written more about this here.) Only recently has the globalization boom turned bluefin into a big moneymaker.

To provide some perspective on such claims by the Nobu chain, the author of the Times article, Paul Greenberg, next describes one of my dinners in New York:

Trevor Corson is an East Asia scholar turned popular nonfiction writer and author of the 2007 book The Story of Sushi, and for select groups he will act as a “sushi concierge,” hosting dinners often at the Jewel Bako Japanese restaurant in Manhattan’s East Village, one of which I attended this past winter. A Corson-guided meal aims to reveal the historical truth of tuna and to represent the very different fish that were the staples of sushi in earlier times. Plate by plate I watched as Corson walked a group of Manhattan professionals through a traditional Edo-period meal of snappers, jacks and other white-fleshed, smaller fish that most definitely did not include “red” tuna.

I’ve taken the Nobu chain to task about this before; I feel sad that Nobu Matsuhisa, perhaps the most successful Japanese sushi chef in the world, seems to have forgotten some of his own traditions.

One sushi dinner at a time, I’m trying to help bring back the forgotten culinary values of this delightful cuisine, and in the process help provide some relief for the world’s most majestic fish. Do join me.

Photo by Kenji Aoki for the New York Times.