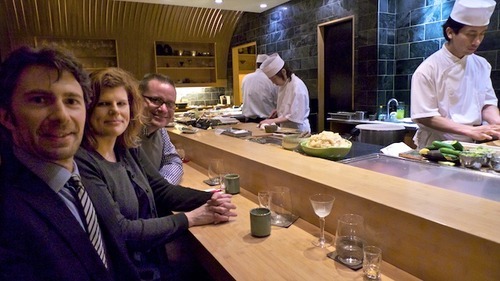 Last night I hosted a private dinner at Jewel Bako in New York for a gentleman named Eric and his wife Michelle, to celebrate her birthday. They were both fairly experienced sushi eaters, but Michelle in particular had been playing it safe over the years.

With my guidance Michelle ended up trying things Eric had been encouraging her to try for a long time: her first raw shrimp, her first raw scallop, her first piece of raw octopus, and her first saltwater eel. And, for two people who didn’t like mackerel, they both ended up complimenting the chef on a special old-fashioned mackerel preparation.

At the end of the meal, Michelle said that with someone – moi – there to talk over the menu in Japanese with the chef, explain everything as it was served, and build her trust in the chef and the ingredients, she’d felt more confident getting out of her comfort zone. This is why I like being a Sushi Concierge. Even Eric, the more experienced one, commented that he was taking away a list of new things he’d learned about the cuisine and eating at the sushi bar.

The only trouble, as Eric complained to me at the end, was that “now it’s going to be awfully hard to go back to eating our regular sushi.”

Posted in Sushi
← Why I Love Hosting Historical Sushi DinnersWhale: To Eat or Not to Eat? →