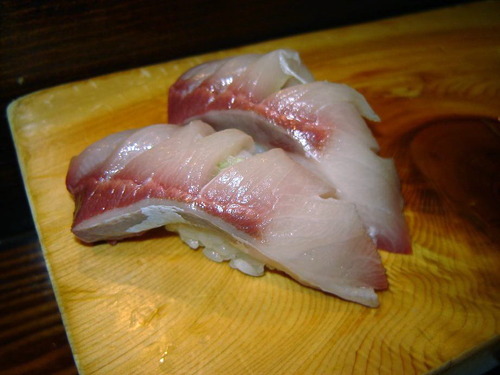 According to some insider info I received recently from a Japanese fish distributor, we can expect the price of hamachi—farmed yellowtail, a sushi favorite—to rise in the near future. The cause: a massive epidemic of red tide that is ravaging Japanese hamachi farms. Details on the red tide epidemic below.

Hamachi is not a fish I ever feature in my Sushi Concierge classes and dinners anyway—it’s one of the “usual suspects” of contemporary global sushi that I avoid. Hamachi owes its popularity not to the fact that it’s a traditional sushi topping, but rather to the fact that, like industrially farmed salmon, it’s overfed and underexercised to an unnatural degree to satisfy our modern demand for fat. It’s cloying and oily, probably carrying toxins, and was never considered particularly appealing by traditional sushi aficionados.

As I write in The Story of Sushi:

Hamachi farmers feed the fry three or four times a day. The tiny fish quickly grow to a hundred times their initial weight. The farmers vaccinate the fish, because disease is a constant danger under crowded conditions, just as on salmon farms. Then the fish are transfered into floating pens.

Every day the farmers fire feed pellets out of a canon into the pens. The feed pellets are similar to the ones salmon farmers use, packed with ground-up fatty fish such as mackerel, herring, sardines, and anchovies, often along with extra doses of oils and vitamins.

The yellowtail eat so much of this feed, and get so little exercise, that the excessive amounts of fat they accumulate actually weaken the matrix of connective collagen fibers that holds their muscles together. That’s why farmed yellowtail is so soft.

Independent researchers have conducted thorough investigations into farmed salmon, revealing that the fish accumulate much higher levels of PCBs from their feed than wild salmon. So far, yellowtail have not been the subject of similar studies, even though lots of people eat high-fat farmed yellowtail in sushi. It would not be surprising if farmed yellowtail have the same problem.

Most yellowtail served in sushi—regardless of the region, type of restaurant, or price the customer pays—come from the same cluster of yellowtail farms, located off the coast of western Japan.

And due to the red tide epidemic, these farms are in trouble. Here’s the insider info I received from the fish distributor, who also talks about “CO”—carbon monoxide—which is widely used in the sushi industry to gas tuna and yellowtail to make it look red after it’s already lost its natural color: The below is an email I received from a shipper in Japan which explain how this on-going incident might affect Hamachi production/price in near future:
One area has lost 240,000 ps of 2-3 years old Hamachi because of current red tide, and this is where [distributor names] have been sourcing their frozen Hamachi.

Other areas have been hit as well. … The scary part is that this red tide hasn’t been contained, still out there and nobody knows what happens next. …
I feel bad enough for those small Hamachi farmers. They’ve been struggling for years, just barely surviving, but now this natural disaster is hitting them.

About two weeks ago, the guy who has patent on treating Tuna loins with CO just won a case against CO Hamachi packer. People in the industry thought that all other CO Hamachi processors will be in trouble because this guy has been making his living by suing companies. … I didn’t let you guys know about this because I don’t think we need to worry about [distributor names], etc. losing battle against this guy and [distributor name]’s CO Hamachi will become unavailable, or cost gets higher. This guy sued me over three years ago for moving CO treated Tuna in 2003-2004 and my lawyer took care of it and no damage at all. Just like my case, I don’t think a potential lawsuit will do any harm to [distributor names], etc. for sourcing their CO Hamachi.

However, this red tide is different. In Japan, red tide of this magnitude has never occurred, but this year’s much-more-than-normal rain falls and higher air temperature have cause red tide to be formed at a scale which unheard of. Two possible trends to take place soon; 1) The market price will jump; 2) Farmers will harvest remaining Hamachi immediately and turn them into case, or keep them in freezers for later processing. One way of another, Hamachi price has to rise soon, because now Hamachi farmers have to pay higher insurance premiums to feel secure about their inventories.

Posted in Sushi and tagged health
← Why Pickled Ginger Is Like Ice CreamBetter Sushi, But Without Bluefin Tuna →