Debate is raging over in Europe (and in the pages of New Scientist magazine) about whether crustaceans should have legal rights, like cows and pigs. The animal-rights crowd frets that these underwater bugs might feel pain when we boil them alive.

Here is my tried-and-true solution to this question:

As the author of the definitive book The Secret Life of Lobsters, I can tell you that technically, we don’t know exactly whether crustaceans feel pain or not. But you know what, it seems a safe assumption to me that being boiled alive probably sucks. So let’s just kill them before putting them in the pot. It may seem gruesome, but if you have your heart set on eating these guys, you can show your respect for their lives by taking the trouble to give them a quick death. So I offer my humane-approved method for dispatching lobsters at home, with pictures of me showing you how to do it.

Step 1: Cool the lobster in the freezer for fifteen minutes or so. Lobsters are cold-blooded and their body temperature adapts to match the ambient temperature around them, with a corresponding slowing of their heart rate, metabolism, and neural functioning. Cooling the lobster prevents it from moving around while you’re working, which is a lot safer, and results in some deadening of the animal’s nervous system.

Step 2: Hold the lobster upside down and place the point of the knife between its hindmost legs. 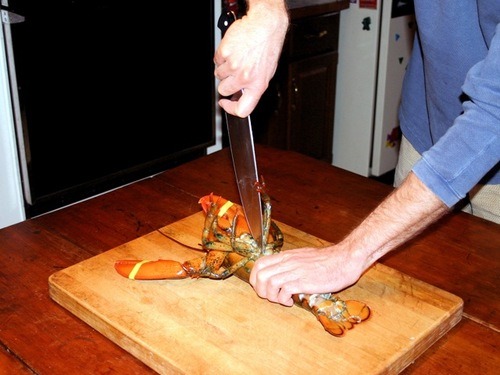 Step 3: Thrust the knife straight down into the body, and proceed immediately through Step 4. 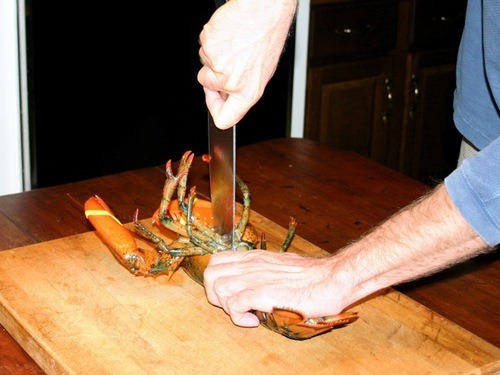 Step 4: Slice down through the head, to split the front of the animal in half. 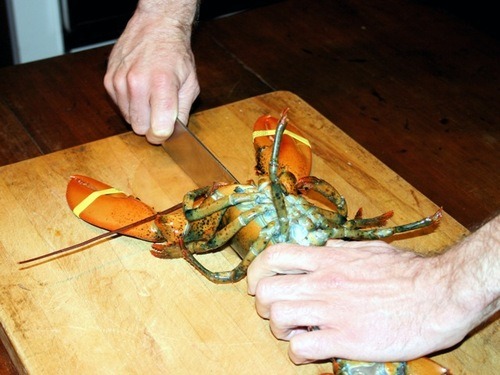 • You don’t have to slice all the way through the last bit of shell to the cutting board; leave the top of the lobster’s shell intact for a more attractive presentation on the plate.

• If you execute the knife maneuver correctly, the claws and front legs should go instantly limp. But be aware that because lobsters have a decentralized nervous system, even though you have severed most of the nerve ganglia in the front of the lobster, the tail and hind legs may continue to twitch. (If that bothers you, remember that this is an animal equivalent to a mosquito. If it still bothers you, you should probably consider eating mock lobster.)

• Immediately after you kill the lobster, put it in the pot to boil, as you would have with the live animal.

WARNING: By reading this page you hereby agree to use the methods described here at your own risk. I make no claims to be a qualified instructor of culinary butchery, and I will not be responsible if you hurt yourself using a knife in your kitchen.

On the other hand, for those of you who crave additional drama and heroism in your kitchen, there are, of course, even more exciting ways to kill a lobster: 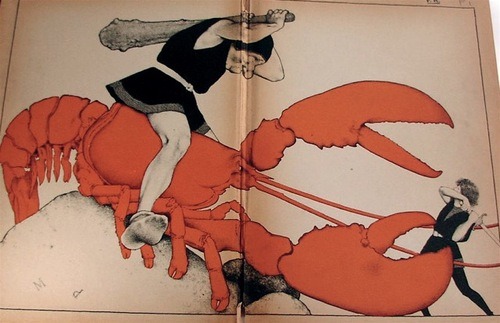 P.S. For further reading, see my article “Lobster on Trial: Boiling Point” in Boston magazine. And don’t take my word for all this. What follows is a statement prepared by Dr. Neville Gregory, who received an award from England’s Royal Society for the Prevention of Cruelty to Animals.

(At the time Dr. Gregory prepared the following statement on lobsters, he worked in the Animal Welfare and Stress department of the New Zealand Ministry of Agriculture and Forestry. New Zealand has a significant fishery for spiny lobsters.)

The Humane Way to Kill a Lobster
by Dr. Neville Gregory

The appropriate way to humanely kill a lobster is to chill it, then kill it by either splitting or spiking it.

Chefs using this method can be sure that they are killing the lobsters humanely, while preparing good quality lobster meat.

Any animal killed for meat consumption must be killed humanely. This means the animal must not be stressed when being handled, should be held at the place of slaughter for only a short time under appropriate conditions, and the killing method must not cause pain or distress prior to death.

Freezing or boiling methods affect the quality of the meat. Boiling lobsters alive tends to make the meat chewy while freezing makes the meat lose its fresh appearance. Both are inhumane.

Lobsters need to be chilled before being killed.

Being cold blooded, chilling the lobster helps reduce nerve function and metabolic activity. When it is fully chilled, the lobster will stop moving and no longer responds to being handled.

After chilling a lobster, split it along its length where it has two chains of nerve ganglia, with interconnecting nerves along its body under the shell. Chilling beforehand prevents the lobster from moving which avoids mistakes during splitting—otherwise it is hard to achieve a humane kill in an unchilled animal.

Original text and photos are © copyright Trevor Corson. Please only use this material with attribution, thanks!

Posted in Lobster and tagged lobster
← What Do You Mean, No Tuna?How to Kill a Lobster Humanely →