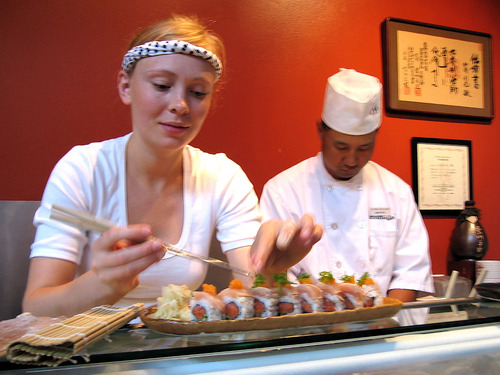 Photo: Danish sushi chef Fie Kruse, who is depicted in Trevor Corson’s book The Story of Sushi, prepares dinner for a customer. Photo by Trevor Corson.

These questions are fodder for my post this week on the Atlantic’s new Food Channel, which prompted some interesting discussion, and for an article I wrote in the June issue of the Atlantic magazine. There’s also an accompanying narrated slideshow, in which I describe how I got interested in the phenomenon and which features several of the surprisingly numerous non-Asian sushi chefs I’ve encountered. As you can see from their photos, they sure don’t look Japanese.

Indeed, one of the ironies here is that many of these non-Asian sushi chefs are offering an experience that is arguably more authentically Japanese than what a lot of Japanese chefs are offering. Yet these American chefs often told me that their American customers frequently give them the cold shoulder, because they don’t look the part. Would you?